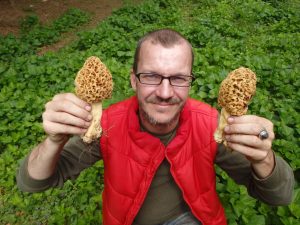 OPPORTUNITIES WITH FUNGI THAT MAKE A DIFFERENCE
From building materials to psychedelic mushroom research, Tradd Cotter will be discussing the latest research and what could be on the horizon involving fungi and civilization. Other topics will be antibiotic research, advancing mycopesticide opportunities to replace chemical pesticides, and astromycology. Forget what you want in life, mushrooms will give us what we need to survive the next millenia on planet earth.Open your mind and heart to the kingdom fungi!

Tradd Cotter is a microbiologist, professional mycologist, and organic gardener, who has been tissue culturing, collecting native fungi in the Southeast, and cultivating both commercially and experimentally for more than twenty-two years. In 1996 he founded Mushroom Mountain, which he owns and operates with Olga Katic, to explore applications for mushrooms in various industries and currently maintains over 300 species of fungi for food production, mycoremediation of environmental pollutants, and natural alternatives to chemical pesticides.

In 2014, Tradd completed and published the best-selling book Organic Mushroom Farming and Mycoremediation (2014), that is still one of the top ten releases with the publisher, Chelsea Green. Tradd has won numerous awards for his work including the prestigious Clemson University Entrepreneur of the Year Award (2013), the EPA GRO-U Fellowship Award (2011), and an expert lecturer on all topics related to fungi in agriculture and medicine.

His primary interest is in low-tech and no-tech cultivation strategies so that anyone can grow mushrooms on just about anything, anywhere in the world. Mushroom Mountain is currently expanding to 42,000 square feet of laboratory and research space near Greenville, South Carolina, to accommodate research for commercial production of new and experimental species, as well as mycoremediation projects. In 2018 Mushroom Mountain started a daughter company, MYCOMATRIX, that develops novel medicinal extracts for consumers and cobranding into consumer products. In 2019 Mushroom Mountain opened THE BLUE PORTAL, a psilocybin research and mediated session center, that is available in Jamaica and soon Costa Rica. Tradd’s current research projects include bacterial interactions with fungi and novel antibiotic discovery.